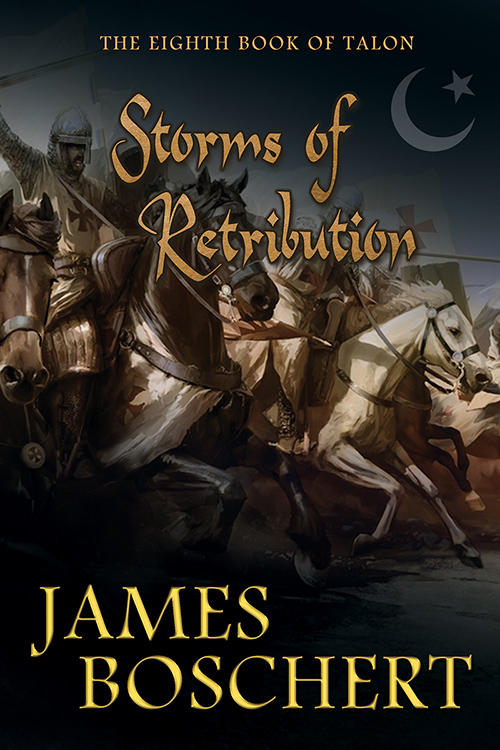 BOOK 8 — The year 1187 is one of the most fateful for the Christian crusades in the Holy Land, and one of the most disastrous.
With an act of savage banditry, an infamous lord of the Kingdom of Jerusalem destroys the treaties that have made possible trade and a fragile peace. Led by Salah Ed Din, the armies of the Arab world converge on the borders of the Christian kingdom, seeking retribution. Duke Raymond, the Count of Tripoli, sends for Talon, reminding him of the promise he made: to return to Jerusalem after he completed his quest to find Ra’van. The Duke is confident that, with Talon’s help, he can help prevent a disaster of enormous magnitude by negotiating directly with Salah Ed Din. It almost works. But the King of Jerusalem and his advisers, who know little of the land and nothing of their opponents, refuse to honor the pact and ignore the warnings.

Talon and his faithful companions finds themselves fighting for their lives at the springs of Cresson and the Horns of Hattin, then among the survivors who take refuge in besieged Tyre. But how can they hold out, when Tyre is governed by one who would deliver the port city of Tyre to Salah Ed Din in exchange for his own safety?

And what of Cyprus? In Talon’s absence, more than one opportunist sees an occasion for conquest. The castle of Kantara is a plum for the taking, and rumors of hidden gold only make Talon’s enemies more determined than ever to take possession of all he has left behind. Spies, assassins, and pirates converge on Cyprus, and mayhem ensues.

“Let me begin by saying that I’ve read all of his books and I love them all! This series is exciting with great character development that keeps you hooked. This book is a wonderful addition and I can’t wait for the next one.“
— Amazon Review

“Wow was my response after the first book in the series…there was excitement from the very first paragraph. Eight books of character development, descriptive writing on cultures and locations, variety of perspectives and…Wow. This series to me ranks up there with Cornwell, Wilbur Smith, Lawhead, James Nelson, etc. Waiting for the next book drives you crazy, waiting till it shows up on Amazon… Enjoy the read!!!“
— Amazon Review